Week characterized by ups and downs, for some of the altcoins with new all-time highs, including Ethereum, which for the first time reaches $ 2,150.

Despite these records, the week is about to end without the right confirmations necessary to kick off the new monthly cycle.

At the moment they are not supporting the trend of the last few days, thus creating a general uncertainty that contributes to lowering the volatility to the lows of the last 5 months.

For the first time, Bitcoin, after six consecutive days with volumes under 10 billion dollars, the most series since the beginning of the year, closes the day with exchanges of 11 billion dollars.

Ethereum continues to trade with daily volumes under $ 7 billion.

Over the course of the week, the total capitalization attempted several times without success to break the 2 trillion dollars.

The dominance of Bitcoin fluctuates above and below 55%, the lowest level in the last six months. It is an indication that marks the start of the new altseason lacking at the moment the necessary confirmations to give the official start. Confirmations that must arrive within the next few days in order not to risk a reversal of both the trend and sentiment.

The week saw the explosive return of XRP which ended with a rise of over 75% , the best performance among the top 60 capitalized. Ripple after more than three years returns over 1.10 dollars.

The day sees the best token increases of the entire week achieve. Today, Binance Coin (BNB) stands out among the best rises, which with a 10% rise reaches new historical records at $ 435.

Another noteworthy rise is that of Enjin Coin (ENJ) which rises by more than 20% from yesterday’s levels, recording a gain and a weekly performance that goes beyond 40%. 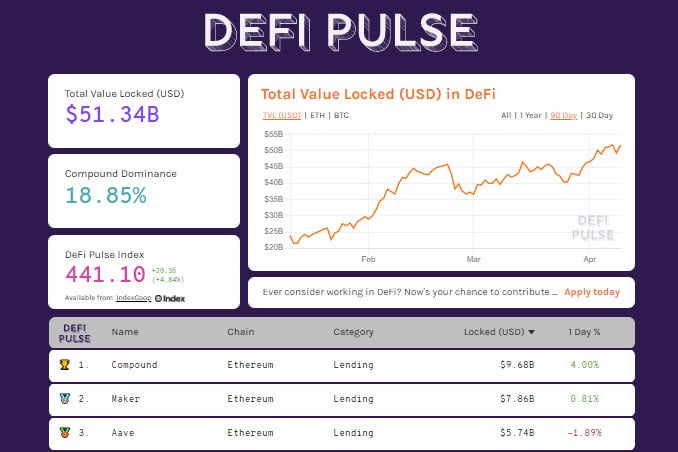 The good general trend brings DeFi’s locked total value to the highest levels ever with over $ 51.3 billion.

Compound consolidates its first position as a project with the highest level of immobilized collateral, a position conquered during the week after several months of Maker’s undisputed leadership.

In the last 24 hours Aave, another loan and financing project regained the third position in the ranking of DeFi protocols.

Despite the uncertain movement that characterizes the price of Bitcoin since the beginning of April, the holding of the lows of this first full week of April, area $ 55,600, a level that coincides with the dynamic bullish support, provides the only signal that currently supports. the resilience of the uptrend that started again at the end of January.

Over the weekend it will be necessary to confirm the resistance of the lows as a break in a phase with low trading volumes could cause speculative downward movements.

About the Author: Wilbert Price